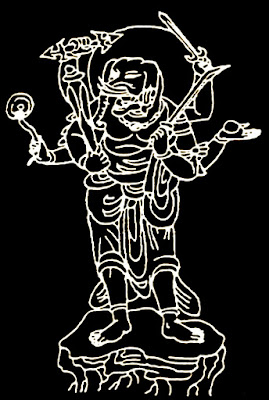 In 705 CE, amoghavajra was born in Samarkand to a brAhmaNa teacher from either Prayag or Kashi and his Iranian wife. His father died when he was 10 years old and he moved to the chInadesha with his mother and uncle. There he became a student of the great nAstika tAntrika vajrabodhi, a brAhmaNa from Kanchipuram, who settled in chInadesha after a long journey in the east. From Kerala, vajrabodhi had gone to Shrilanka and from there he went to the Nicobar islands. From there he went to Sumatra and finally reached Kwangchow, where he became a guru of the chIna princess Tu-ku-kuei-fei. Along with amoghavajra and his Korean student Hyecho praj~nAvikrama he taught several aspects of the tAntrika lore to numerous chIna students. In 730s amoghavajra succeeded vajrabodhi as the guru of the realm. In 741 CE the nationalist legalistic Han faction had an edict passed to kick out all Indian and Korean guru-s and students from China. In this period amoghavajra went to Java and then to India to learn under different AchAryas in the high universities of bhAratavarSha. In 746 CE he was called back to chInadesha to perform tAntrika rituals for the emperor of all chIna-s Xuan-zong and the princess Hua-yang was made his adopted daughter. In 751 CE the chIna army at peak of its military glory came to face to face with the Islamic jihad at Talas. The result was disastrous for the former and the Tang war machine met one of its worst defeats in a long time. This was quickly followed by another drubbing at the hands of the Qarluq Turks led by their yabghu Tun Bilge. On the other side of the chIna world, the Tang generals attempted and invasion of Thailand and met yet another crushing defeat at the hands of the rAjA of Thailand. This shook the Tang empire paving the way for the eventual rebellion of the Irano-Mongolian rokShana (An Lu-shan). In course of these events the defense of the Tang border zones came under prince Wumin of Xiping, who invited amoghavajra to perform abhichArika rituals. Fearing his tAntrika rites, in course of his takeover of the chIna throne, rokShana’s captured amoghavajra, while he was translating the tattva-saMgraha, a yoga tantra. Subsequently, his patron prince Wumin was also captured and killed by rokShana’s son. But in 757 CE the chIna forces defeated the son of rokShana and killed him to restore Tang power, giving a chance for amoghavajra to escape. However, shortly thereafter the chIna-s suffered a defeat at the hand of the Uighur Turks and faced an attack from the Tibetans. At this point the Tang emperor Su-zong called upon amoghavajra to perform great tAntrika rituals to purify the palace of the emperor and a jayAbhisheka for the survival of the Tang empire. In these rituals he deployed secret mantra-s to the vinAyaka yAmala to prevent vighna-s from afflicting the chIna-s. After the Tang revived their fortunes in 760 CE, amoghavajra performed a complex tAntrika ritual in which he crowned Su-zong as the chakravartin sArvabhauma. Shortly thereafter, he was joined by a brAhmaNa from Kashmir named praj~nAchakra, whom he initiated into a secret ritual of the chatur-vinAyaka-maNDala. In 765 CE he is supposed to have performed a long abhichAra rite on behalf of Su-zong right using the ma~njushrI kumArabhUta mantra to kill the Uighur Kha’khan. Thus, amoghavajra became a highly regarded tAntrika and was declared minister of the realm of the chIna-s, and was declared praj~nAkosha or the treasury of knowledge by the chIna emperor. Both amoghavajra and his successor praj~nAchakra were rAja-guru-s for Su-zong and his successor Dai-zong (on whose behalf amoghavajra had performed apotropaic rites when he was a general during the rokShana rebellion).

One of the secret vidyA-s that he promulgated were a set of rituals to gaNapati and his shakti whose originals appear to have been lost in India. But they are of greatest significance in understanding the gANapatya ritual; hence we describe them here. An account of the chIna Hanguang mentions that he received dIkSha in the secret sAdhana of gaNapati and his shakti from amoghavajra in 747 CE. He mentions that the prayoga was so secret that neither the mantra-s nor the maNDala and rites were recorded. The says the rites covered puShTika, shAntika, vashIkaraNa, abhichArika, AkarShaNa, and Ayuvardhana, i.e. a particular ShaTkarman encompassing both apotropaic, lifespan increasing and attacking rituals. He only briefly elaborates on the root bIja of vinAyaka being gaH (a nAstika form of the original gaM from the Astika tradition). He then tries to provide a bauddha overlay to explain the nature of vinAyaka – he claims that both vinAyaka and avalokiteshvara emerged as emanations from the dharmakAya (the pervasive body) of the cosmic buddha vairochana (the deity in vairochanAbhisaMbodhi tantra). Then avalokiteshvara transformed into a female and became the shakti of vinAyaka to pacify him. Hence, they are worshiped as a couple. Jing-se in his vidhi provides a few further details of the transmission of amoghavajra: He says that the vinAyaka-s might be worshiped as: 1) the vinAyaka yAmala – where vinAyaka is conjoined with his shakti. In this depiction his shakti is clearly depicted in a proboscicephalic form. It is clear from the navArNa mUlamantra of the original gANapatya tradition promulgated by the great AchArya herambhasuta in India (the element “hastipishAchi likhe”) that this is what was originally intended, although in the later period in India an entirely anthropomorphic shakti became the norm.
2) the ShaDbhuja vinAyaka – this form is depicted above from the original drawing of vajrabodhi or a copy there of. Tradition holds that vajrabodhi was a skillful iconographic artist.
3&4) are chaturbhuja vinAyaka-s.
5) The 4 seizing vinAyaka-s as ordained by the parishiShTha of the atharvaveda and the mAnava gR^ihya sUtra of the maitrAyaNIya tradition. This was already taken up by the nAstika-s and incorporated into the subAhu-paripR^ichCha, a text from the kriyA tantra layer.

It is regarding this last version of the 4 vinAyaka-s that praj~nAchakra the student of amoghavajra records a remarkable ritual.This ritual is termed the ritual of the magical plates for the deva Amoda sUrya (vinAyaka). He first makes the circular heaven plate about 3-4 a~Ngula-s in diameter and then the square earth plate with its side 7 a~Ngula-s from a white fragrant wood on an auspicious day. He avoids seeing evil-doers when he is preparing and painting this yantra. He fixes two handles to the heaven plate and connects the two plates with an axial pin. On the heaven plate facing east he writes the bIja AM in a leaf and visualizes a red Amoda-vinAyaka on a jade seat with a red body and wrathful face. He is surrounded by many troops and holds a vaiDUrya stone and a spike. To the south in a leaf he writes the kUTa jI and visualizes Amoda kAma vinAyaka holding a modaka and a radish, seated on a ruby throne. He is surrounded by 18 crore hordes yelling like jackals. To the west in a leaf he inscribes hrIH and conceives Amoda soma vinAyaka with 104 thousand crore troops. He is seated on a tiger skin seat and is known as ekadanta. On the northern side in a leaf the kUTa mA is inscribed and vAgIshvara gaNesha is conceived seated on a and of the blue green color with his hands showing the asi-mudra seated on a black stone throne with koTi-ayuta gaNa-s around him. In the center of this plate he may place an image of rudra. On the earth plate in the directions the following deities are inscribed indra (E); agni (SE); yama (S); nirR^itI (SW); varuNa (W); vAyu (NW); vaishravaNa (N); rudra (NE). These are surrounded by the 28 nakShatra-s and 36 animals. He then displays the special vinAyaka mudra to call the for vinAyaka-s. Then he invites the 4 seizing vinAyaka-s with the mantra “OM vakratuNDAdipatye svAhA ||”. Then he deploys a certain vakratuNDa mAlA mantra and displays a the vishva mudra. Then he shows the tejorAshI mudra and invokes the deva-s in the earth plate and utters the incantation (“OM shatrupramardine svAhA ||”). He then shows the kuNDa-mudra and invokes the nakShatra-s and the 36 animals with a mantra that we are unable to decipher. In the chIna transliteration it goes: “OM chi-ri-an-gi-ru-ni-ye svAhA ||”. He then shows the vajra mudra and invokes the multitude of gaNa-s of vinAyaka with a mAlA mantra. Then he shows the bhakti mudra.

The recovery of this ritual from chIna sources is important because it belongs to the class of texts associated with the transition from the seizing vinAyaka-s to the classical vinAyaka-s. It is of interest to note that the text describes the 4 vinAyaka-s of being of the same basic substance. This is reminiscent of the the yAj~navAlkya ritual stating that the 4 or 6 seizing vinAyaka-s are essential manifestation of a single vinAyaka, umAsuta.