The dance of the bhairava

Posted on August 5, 2014 by mAnasa-taraMgiNI 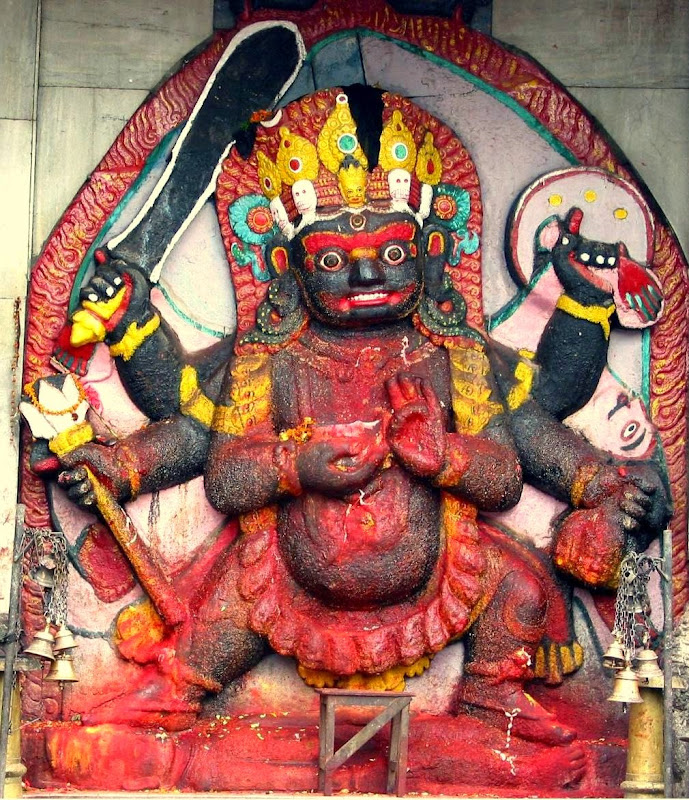 bhairava on a cadaver from Nepal

By the periodic closing and opening of his eyes he has made day and night manifest;
By spreading his lashing, bristly mass of hair, he has covered the sky till the horizons;
Drinking cloud-streams released from the fissures of the skull bowl held in his hands,
having shattered ear-drums with the roar he has let out, this corpse-eater dances!

The bhairava ectype of rudra became central to the shaiva traditions related to the kApAlika branch of the old pAshupata form of the shaiva-shAsana. Some sAdhaka-s of these traditions engage in niHsha~NkAchara, which involves practices such as consumption of human flesh in cremation grounds. This is indeed the practice alluded to here. This might have deep roots earlier Hindu thought. In the shruti, the deva rudra is closely associated with agni – to the point that they are explicitly identified with each other right from the R^igveda (e.g. tvam agne rudro asuro mahodivaH |). The deva agni is said to come in two earthly forms: 1) havyavAha – one who carries the oblations to the gods; 2) kravyAda – one who devours the corpse on the cremation pile and carries oblations to the deceased ancestors. The former is auspicious and the later is inauspicious (kravyAdam agniM pra hiNomi dUraM | i.e. I send afar the corpse-eating agni). This dichotomy in agni is also reflected in rudra: on one hand he is shiva (auspicious) and daivyo bhiShak (the divine physician) or jalASha-bheShaja (one with anti-fever drugs) on the other hand he is the terrifying rudra who is described as goghna (cow-killing) and pUruShaghna (man-killing), traits shared with his Greek cognate Apollon.

Given these Vedic antecedents, in the later days of the shaiva-shAsana the bhairava was conceived after the image of agni kravyAda: His common iconography (as seen above at the Durbar Square, Kathmandu) depicts him as standing upon a corpse with flaming hair. Thus, he appears to be a personification of agni kravyAda, as he is called in the above verse. However, it is clear from the verse that the bhairava here is the supreme deity of the shaiva shAsana with whom the sAdhaka attains unity in his ritual performance in the shmashAna. It is probably in this context he utters such verses describing the universal nature of the bhairava: The closings and opening of his eyes are said to be the nights and days. This theme is common in shaiva lore where the universe is said to have been engulfed in darkness when umA closed rudra’s eyes at the time of the creation of andhaka. His bristly hair is said to fill the universe. In the shaiva lore this is captured by the name of shiva as vyomakesha. For example, in the ujjayinI copper plate of the paramAra rAjpUt yashovarma-deva, a descendent of the great king bhoja-deva we find the following:

jayati vyomakesho .asau yaH sargAya bibharti tAM
aindavI shirasA lekhAM jagad bIjA~NkurAkR^itim ||
Victorious is he whose hair fills the space (vyomakesha), who for the emitted worlds (sarga) bears with his head the lunar crescent which is like the embryo in the seed which is the universe.

For a modern the metaphor of the hair of the bhairava filling space would, not surprisingly, evoke the imagery of the lines of force fields filling the universe. The verse then talks of the bhairava dancing on the cremation group drinking water from the fissures in the skull bowl. This metaphor has two elements to it. In the celestial plane the clouds pouring rain are identified with the kapAla held by the bhairava. On the other hand the water flowing down from the fissure of the skull is a metaphor for the concept of amR^ita-sravaNa (streaming of nectar) from within the skull, which a yogin is supposed to experience as part of practices associated with bhairavAchara (e.g. khecharI mudra). Finally, the verse talks about the ear-splitting noise, which relates to the beating of the Damaru (the hour-glass drum) accompanying the dance of the bhairava. While filling the air with noise, tradition also records that the noises from drum of rudra form the basis of the grammar of pANini (i.e. the mAheshvara sUtrANi).