Posted on October 1, 2016 by mAnasa-taraMgiNI

The basic construction
In course of studying various methods of constructing conics we stumbled upon a means of using the relationship between uniform circular motion (UCM) and simple harmonic motion (SHM) to construct four distinct loci with common procedure. They seem to describe the progression in the process of knotting a string — in a sense the “Platonic” ideal of the making of a knot. The basic construction goes thus:

1) Draw a circle with origin O as center and radius

. This is our directing circle.
2) Let A be a point on the circle and

its diameter along the x-axis.
3) Drop perpendicular from A onto

so that it cuts it at point D.
4) As point A performs UCM on the directing circle the point D performs SHM on the diameter

. We can locate point D on

with respect the midpoint and and extremity of its oscillation using two segments, namely

.
5) We thus get two reciprocal ratios:

.
6) We draw the radial line which passes through points O and A.
7) Along this radial line, we locate two points symmetrically about point A, namely points E and F such that:

.
8) The loci of points E and F as A performs UCM on the directing circle are a parabola and a knot curve.
9) Likewise, we locate two points symmetrically about point A, namely points G and H such that:

10) The loci of points G and H as A performs UCM on the directing circle are a straight line perpendicular to the x-axis at r and a conchoid of Nicomedes.

When we derive their equations formally we get a pair of each of the four loci, as will be illustrated below.

Let us first consider the case in the above construction as typified point F:
1) The coordinates of point F are

.
3) From the construction we obtain the following relationships: 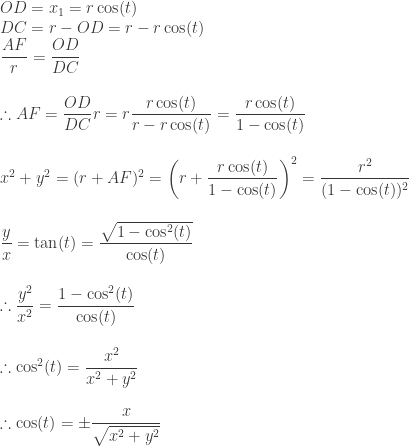 With these relationships in place we can eliminate 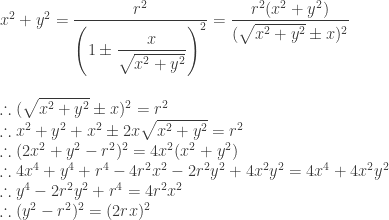 The above equation defines a double parabola. By resolving it we get a dyad of parabolas:

In the above construction we considered only one intersection between the radial line and the directing circle; in reality there are two. Hence, if we consider the intersection happens diametrically opposite to point A then we would get a second mirror image curve. This is why in the formal derivation we get a dyad of opposite facing parabolas.

The two parabolas share the x-axis as their common axis and expand in opposite directions. They intersect the x-axis at

and the y-axis and the directing circle at

Formal derivation of the equations of the knot curves

We next perform the same operation as above on the case typified by point E. Its coordinates are

, which are the coordinates of the locus whose equation we are seeking to derive.The following relationships remain the same for point E as above:
1) The coordinates of point A on the directing circle are

But here we have to consider everything in terms of point E; hence we have: 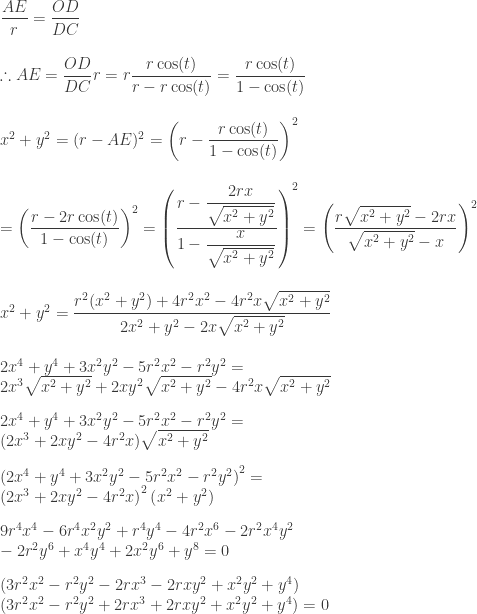 The above equation defines a double knot curve. By resolving it we get a dyad of quartic knots:

which marks the maximum horizontal extent of the loop of the knot on the side opposite to the knot point. For both knots the points of inflection and knotting is at

. The free ends of the knot with the left-facing inflection cross over the loop of the knot respectively at

. The free ends of knot with the right-facing inflection cross over the loop of the knot respectively at

. Thereafter the free ends run below the above pair of parabolas and converge towards them as

. The maximum horizontal extent of the humps of the right-facing knot on the side of the knot/inflection point is given by the points

. The same for the left-facing knot is

. For the right-facing knot the maximum vertical extant is given by the points

. For the left-facing knot it is given by the points

Formal derivation of the equations of the straight lines

Now we shall consider the cases with the reciprocal ratio. First we shall tackle the case represented by point H in the construction. Its coordinates are

, the coordinates of our desired locus.
We have:

.
As above point A performing UCM on our directing circle has coordinates

.
From this we get

Now for the point on the locus we have:

The above equation defines a dyad of lines which can be resolved as:

; These are a pair of vertical lines that cut the x-axis at

Formal derivation of the equations of conchoid

Finally, we shall consider the point G

in the construction to derive locus it specifies. We have

; hence from above we get

. However, for point G we have: 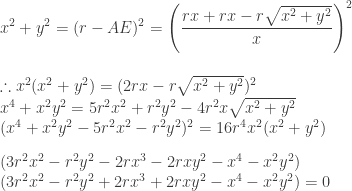 The above equation defines a double conchoid and by resolving it we get the two conchoids:

The two conchoids have the respective lines

as the asymptotes of their two branches. The bow-like branches of the two conchoids intersect the x-axis at points

. The loops of the two conchoids cut the x-axis at

and the point of looping is at origin coincident with the point of knotting of the knots. Thus the two asymptotic lines are the tangents to the loops of the opposite conchoid at

. The loop of the right-looped conchoid bounded by the points

which mark its maximum vertical extent. For the loop of the left-looped conchoid the corresponding bounds are the points

In addition to having a nice symmetry to them these equations also represent an interesting progression in the process of knotting a linear entity like a rope or a polymeric molecule like the DNA double-helix: the straight line represents the starting state of the linear entity. The parabola represents the next with a bending appearing in it. Third it undergoes more extensive bending and looping as represented by the conchoid. Finally, it undergoes knotting in the form of the knot curve. Alternating, between the loci specified by the two reciprocal ratios we get this progression. Thus, the combination of UCM and SHM can be seen as mechanism to specify a knot through serial transformation of a linear entity. Another notable point is that the pair of loci produced by the same ratio are mutually asymptotic at their free ends. 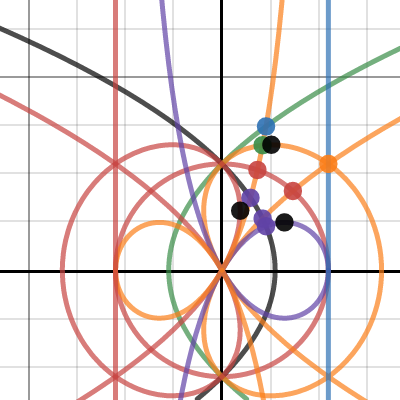 Finally, we shall consider the non-obvious points of intersection between the above loci which have not been mentioned earlier. There are 4 sets of them in each of the 4 quadrants which are symmetric when we have all 4 pairs of loci. Hence, we provide those only for the first quadrant with those for the remaining quadrants being the same except for sign changes.

is the Golden ratio. This intersection produces an angle of

with respect to the x-axis thereby defining a regular pentagon