Squares and their residues
This is an exploration of number triangles in the same vein as some other such we have previously described . It resulted in some observations that seemed interesting to us. Some are perhaps trivial but some seem puzzling to us probably on account of our very meager mathematics.

Consider the triangle of squares

is comprised of squares of all integers

; illustrated below is the tip of this triangle. 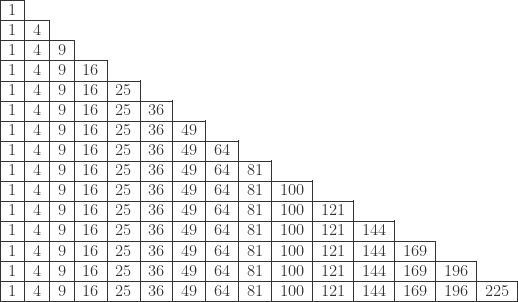 We then obtain the square residue triangle

from it by following operation,

. The first 15 rows of this triangle are shown below. 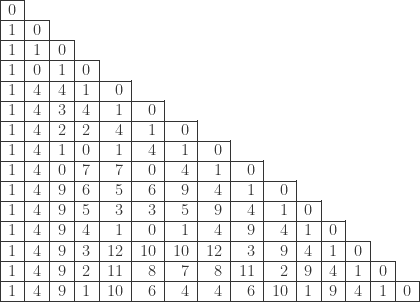 If we look at each row of

, we see a mirror symmetry upon excluding the last term which is always 0. Leaving out the final 0, the first and the last

row are the squares

are found at the beginning of each row from

. After that a new square

gets added to this run of squares at the beginning and end of the row. The reason for this is rather obvious: All

will leave themselves behind as residues of the modulo operation with

will result in a residue in the form of the terminal 0 of that row. Then

, i.e., in the reverse order as the starting run. The middle part of each row between these square terms may or may not be square terms but will also symmetrically expand. The pattern of residues is unique for each row of

but the basic symmetry of the parabolic ascent and descent is common to all. This is illustrated in Figure 1

We observe that for

divisible by 4 we get a supersymmetry, wherein each symmetric half of the row is further symmetric (Figure 1, row 1). All other

show a pseudo-supersymmetry (Figure 1, rows 2 and 3). All

also display a central parabolic region but its particular form varies from number to number.

Now, if we look at

starts with a 0. It eventually terminates in a continuous run of square terms with the value

. Thus, the first column terminates in a continuous run of 1s, the second column in a run of 4s, the third in a run of 9s, so on. In a given column, between the starting 0 and the first

term we observe several notable patterns:
1) Immediately after the starting 0 there is an ascending sequence of square terms. This becomes apparent from the second column, i.e.

, the sequence is 1, 4 — a new square term 4 is seen. 1,4 then continues as the initial ascending sequence of square terms till

, we get a new square term 9; thus yielding the ascending sequence of square terms 1, 4, 9, which continues till

, we get next square term 16, yielding the ascending sequence of square terms 1, 4, 9, 16. Thus, we derived the general formula for the number of terms

Thus, the new square term gets added when

2) The next pattern is more complicated. Starting from the largest and last square term of the initial ascending run of square terms of the column

(described above), we start seeing a series of descending runs, until we hit a terminal 0, which precedes the concluding continuous sequence of square terms

. To understand this let us examine the column

3) We notice that in

, these descents by 1, 2, 3… begin with a certain number that keeps increasing. The descents by each number continue till they hit 0 or the positive integer nearest to 0, which can be attained via such a descent. Thus, the descent by 1 sequence will always terminate in a 0. However, as we saw above, for

, the descent by 2 starts with 11; so the integer nearest to 0 that the run can reach is 1. Now if we look at the descent by 1 sequence, the first column,

, has just 0 before the continuous run of 1s; so we can take the start of the descent by 1 as 0. For

the descent by 1 begins with 1; for

it begins with 4; for

it begins with 7; for

it begins with 12. Similarly, we can identify the starting integers with which the descent by 2, 3, 4… begin for successive columns of 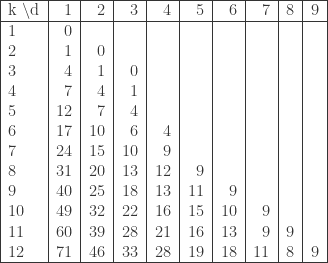 Table 1. The starting integer of each descent run by

(horizontal) for the first 12 columns of

Thus, we get sequences of the starting integers of the descent by a given

in the successive columns of

, we were able to derive general formulae for the

term of these sequences:

Remarkably, for the first of these sequences,

, we were able to find a clear geometric interpretation. It corresponds to the number of edges found in the alternating square-rectangle graph, which is formed by extending the previous element by a unit (Figure 2, panel 1). This sequence has been described in OEIS as appearing in several surprising contexts relating to packing of shapes and beyond. However, to our knowledge this is the first time it has been found emerging in the triangle

. The second of these sequences corresponding to

may also be interpreted as the number of edges in a growing graph of unit squares (Figure 2, panel 2), but describing the growth pattern is less simple than what we see for the case of

. One can imagine that these sequences provide analogies for the growth of cell-layers under certain constraints. We are yet to find a clear geometric interpretation for the case of

. We have not yet been able to find general formulae for

. It is something that mathematicians might be able to find.

has not been previously described.

is given by formula

is the mother of many interesting sequences that show up in other contexts with various geometric/topological implications.

The overall structure of 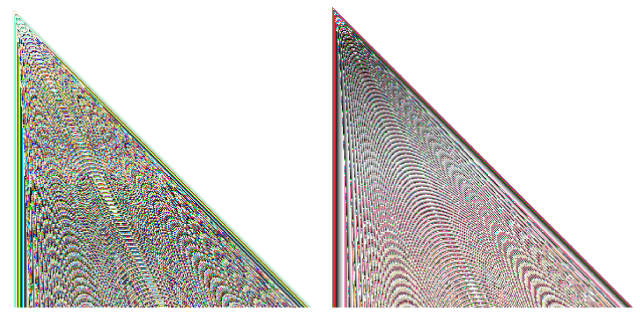 Figure 3. In the left panel

is plotted using a different color for each value. In the right panel the values of

The above-described row-wise and column-wise patterns in

and also their flanks. A mathematician might be able to provide the equations to describe these curves in

Finally, if we take

up to a certain value of

, we can ask what are the frequencies of the various integers in it (Figure 4) ?

Figure 4. The frequencies of the all integers occurring in

. The brown line is the best linear fit for the frequency of the successive perfect squares. The unusually low (red) and high (violet) values among the non-squares are marked.

It is immediately apparent that the perfect squares occur at much higher frequencies than the non-squares. Why this is the case can be generally understood from the above discussion on the rows and columns of

Another way to examine the structure of

is to linearize it. This is done by concatenating successive rows to generate the sequence

such that the first term is placed at 0 with

being the x-coordinate (Figure 5).

with successive terms alternately colored red and blue. The bounding parabola (green) and the primary parabolic attractors (pink) are plotted over

is created by linearizing a triangle it is bounded by a parabola (Figure 5) of the form:

Under this parabola the plot of

reveals a complex pattern, which is clearly non-random. There are curves, which might be termed attractors, on which the points tend to occur more frequently than elsewhere:
1) The most obvious attractors are straight lines of the form

(Figure 5).
This relates to the preponderance of square terms in

2) The next most visible attractors are the parabolic arcs that start from the bounding parabola and run towards the x-axis (Figure 5). We term these the primary parabolic attractors. The coordinates of the starting points of

) are specified by the following algorithm:

primary parabolic attractors themselves are defined by the equations of the form:

We empirically determined that

. However, we empirically determined the first few terms of

and also provide a means of deriving the value of

3) Finally, a closer look reveals secondary attractors in the form of fainter parabolic arcs and lines. We have not attempted to derive their equations. A general scheme for identifying them would be of interest.

In conclusion the humble

, which can be derived using elementary school mathematics, spawns some interesting patterns and sequences that might uncannily appear in other places.