The hearts and the intrinsic Cassinian curve of an ellipse

This investigation began with our exploration of pedal curves during the vacation following our university entrance exams in the days of our youth. It led to us discovering for ourselves certain interesting heart-shaped curves, which are distinct from the well-known limaçon of Etienne Pascal and its special case the cardioid. It also led us to find the intrinsic relationship between the ellipse and the Cassinian curve that is associated with every ellipse. We detail here those observations with the hindsight of multiple decades and the availability of excellent modern geometric visualization software (in this case Geogebra) since the days of our paper and pencil explorations (However, even then we had an excellent set of ellipse and circle templates that our father had gifted us and also an ellipse drawing tool which we had made inspired by the yavanācārya Proclus). We first lay the ground work with some basic results and concepts that provide the necessary background before delving into the heart of the topic under discussion. 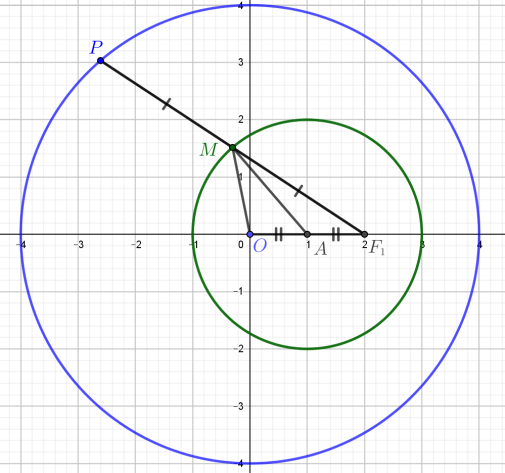 be the coordinates of the point

on the given circle with center at origin

. The coordinates of the given point are

. Let the coordinates of the midpoint

By plugging these into the equation of the given circle

Thus, the locus of

is a circle with

as center and radius of

outside it, what will be the locus of all points such that the ratio of their distances from

respectively is a given constant value 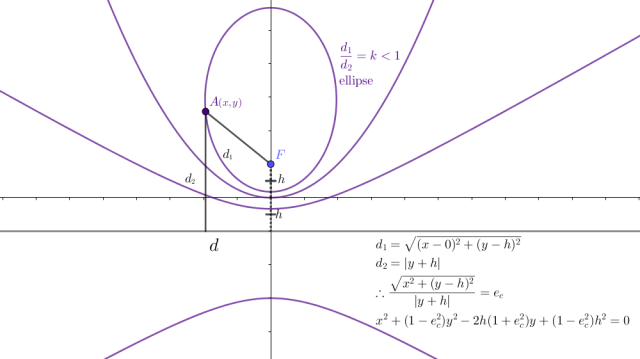 From the solution shown in figure we get the equation of this locus to be:

Being a quadratic curve it will be a conic. Specifically, when

it is an ellipse; when

it is a hyperbola and when

it is a parabola. This relates to why these curves are called conic sections. We can see that the distance from point

. The distance from line

can be represented by a plane containing

. The intersection of this plane and the bicone generates the conic section, which when projected on the

plane appears as the conic curve specified by the above equation (Figure 3). 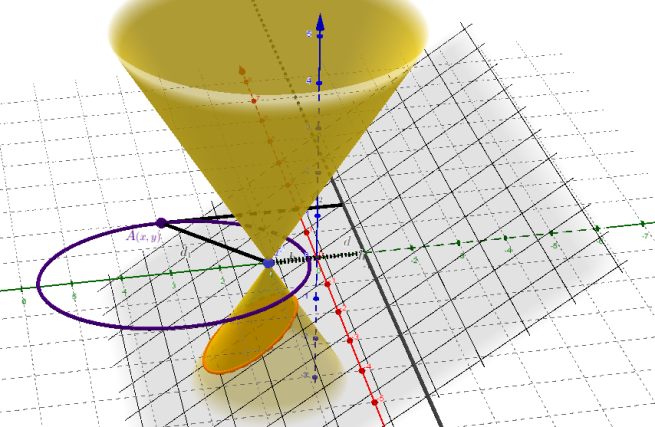 Thus, when the inclination of the plane is less than

it is an ellipse. When it is exactly

it is a parabola. When it is between

we get a hyperbola. Corresponding to this are the Greek terms ellipse: less than; para: equal; hyper: greater than. This number

is a focus of the conic.

By definition the bipolar equation of an ellipse is

is the semimajor axis of the ellipse.

is one of the foci of the ellipse ( for instance, as determined by the construction in Figure 2 and 3) then the second focus

is at a distance of

along the major axis of the ellipse.

. Further, it is easy to see that

is the semiminor axis of the ellipse.

The eccentric circles of an ellipse

Given an ellipse and a point

moving on it, 1) what is the locus of the foot of the perpendicular dropped from a focus of the ellipse to the tangent at

? (i.e. locus of the intersection of the tangent at

and the line perpendicular to it from one of the foci. 2) What is the locus of the reflection of one of the foci on the tangent drawn to the ellipse at 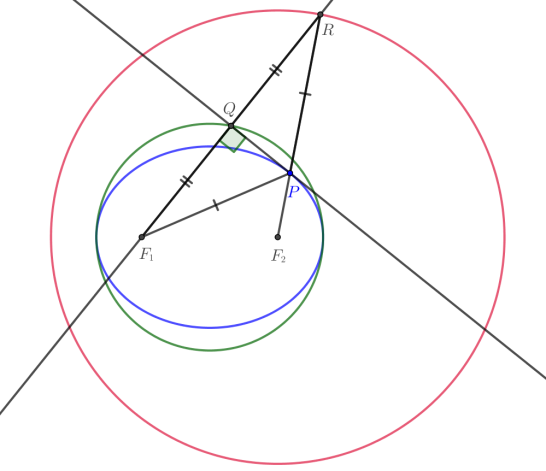 From Figure 4 it is clear that the

by the SAS test. Hence,

. By definition of ellipse

. Therefore, the locus of

It is clear from the definition of

is the midpoint (Figure 4) of

. Therefore, by the eccentric circle theorem applied to the above-defined circle

and center as the midpoint of

, which is the center of the ellipse. Thus,

is the solution to the problem of the pedal curve of an ellipse with the pedal point as one of the foci.

is also the circumcircle of the given ellipse. These two circles

are the two eccentric circles of an ellipse.

Construction of an ellipse using its eccentric circles 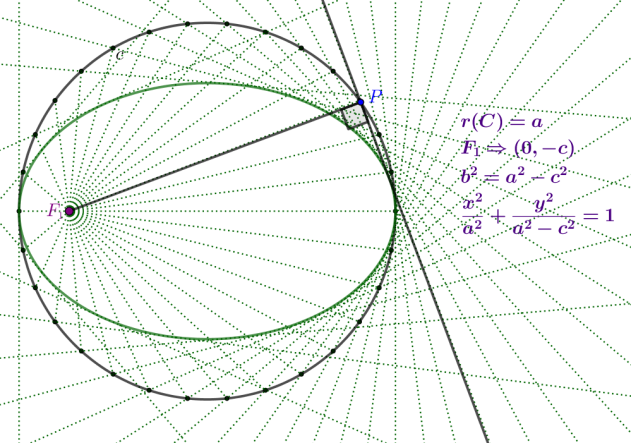 If we are given just the circumcircle

then we can construct the required ellipse thus (Figure 5): Define focus

, a point moving on the circle

. Draw a perpendicular line to

. The envelop of all such lines would be our required ellipse. 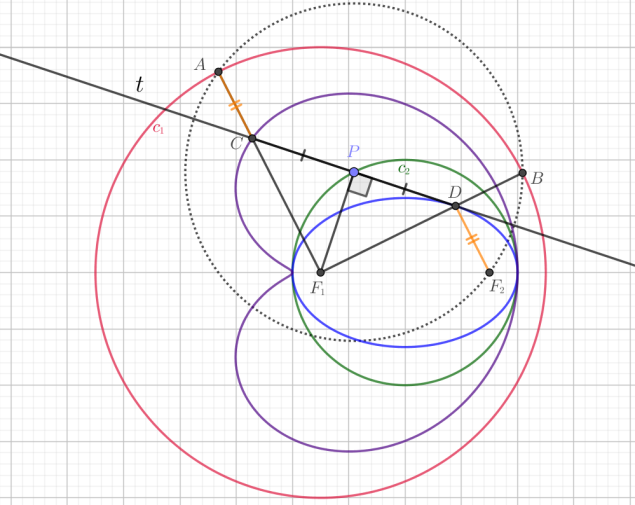 If we are given both eccentric circles

then the construction is a little more involved but has interesting consequences (Figure 6). First define the foci

with origin as center and radius

as center and radius

be a moving point on circle

as center draw a circle which passes through

. This circle cuts the circle

. The points where segments

(Figure 6). The locus of points

gives us the required ellipse (blue in Figure 6).

Notably the above construction of an ellipse using both the eccentric circles yields a companion curve (purple in Figure 6). It usually assumes a heart-shaped form with a dimple or a cusp that superficially resembles the limaçon of Etienne Pascal. However, a closer examination reveals that it is not that curve and has a distinct shape; we term it the ellipse-heart because every given ellipse will have its unique ellipse-heart. From Figure 6 we can also see that the ellipse-heart can be defined for a given ellipse as the locus of the reflection of the point of tangency on the pedal line from one of the foci. Like the Descartes oval and its dual the limaçon, this ellipse-heart can be seen as the dual of the ellipse. Its shape can be described by the eccentricity

of the ellipse. For high eccentricity it shows a prominent dimple that tends towards a cusp as

In order to derive the equation of this curve, we note that by the above definition of the eccentric circle

. We also observe (Figure 6) that the ellipse-heart is obtained by subtracting

from the radius vector of the eccentric circle

is known as the “true anomaly”, as in the definition of elliptical orbits in the planetary theories of Nīlakaṇṭha Somayājin and Johannes Kepler. Given that

, the radial vector of the circle

with the appropriate signs. Thus, if the ellipse is:

While the square of the above equation has an indefinite integral, evaluating it is a bit complicated. Hence, we resorted to the expediency of numerically integrating it and arrived at the area of the ellipse heart

are respectively the semimajor and semiminor axis of the ellipse.

is the area of the eccentric circle

that of the ellipse. Further we also get:

, i.e. the three ellipse parameters form a 3-4-5 right triangle then

. This is a beautiful configuration (Figure 7). Finally, inspired by the above equation for the ellipse-heart we can also define a second ellipse-heart using parametric equations as:

This curve has a classic heart-shape (hotpink in Figure 7) for a part of the range of eccentricities of the ellipse. These curves may be considered bifocal like the ellipse, unlike the limaçons (including the cardioid) derived from the unifocal circle. The ellipse and the ellipse-hearts touch each other at the vertices of the ellipse. Figure 7 shows the relationships between a system of ellipses and their corresponding ellipse-hearts. They might define the outlines of certain leaves or the dehisced pod of the bastard poon tree. 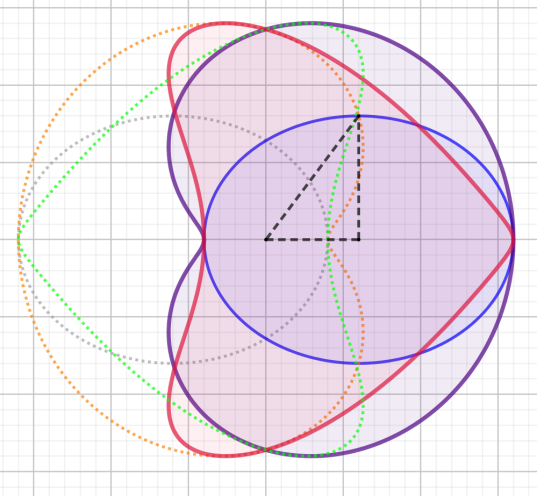 The Cassini curve of an ellipse

Every ellipse is associated with a confocal Cassini curve sharing parameters with the ellipse.

Even though the Cassini curves are well-known, that they are intrinsically associated with every ellipse does not seem to be common knowledge (at least as far as we know). This is despite the historical associations of a version of the Cassini curve, the Cassini oval. Hence, it excited us considerably when, in our youth, we discovered the two to be intimately linked. The curve itself was discovered by the astrologer and mathematician Giovanni Cassini in an interesting context: In the west, as in India, the transition from geocentricity to heliocentricity was neither immediate nor uncontested. Cassini, despite being a prodigious observational astronomer, believed that the sun went around the earth in an oval orbit, which was defined by one lobe of the curve now known as the Cassini ovals. However, later in his life he realized that he was totally wrong and that Kepler was right in describing the orbit of the earth around the sun as an ellipse rather than an oval.

Now, how is the Cassini curve associated with the ellipse? It arises from the following question: Given an ellipse with a point

on it, let points

to the tangent at

. What would be the locus of the points of intersection

of the circles with radii

moves along the ellipse. We solved this thus: 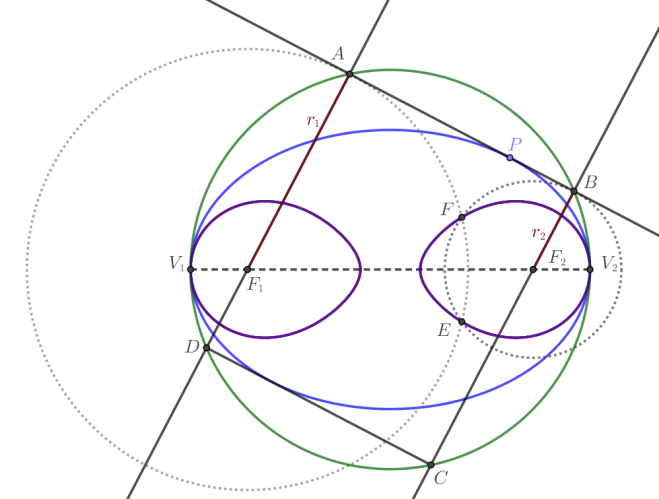 From the above discussion it becomes clear that both

will lie on the circumcircle of the ellipse

(Figure 8). As both are pedal points they would define parallel lines

which form the rectangle

inscribed in the circle

. From this rectangle (Figure 8) it becomes clear that the

. We then apply the well-known Euclidean intersecting chords theorem on

and the major axis of the ellipse

Thus, the product of the two pedal segments of an ellipse is a constant equal to the square of the semiminor axis:

. Now, the bipolar equation of the form

defines the Cassini curve. From this bipolar equation we can derive its Cartesian equation: 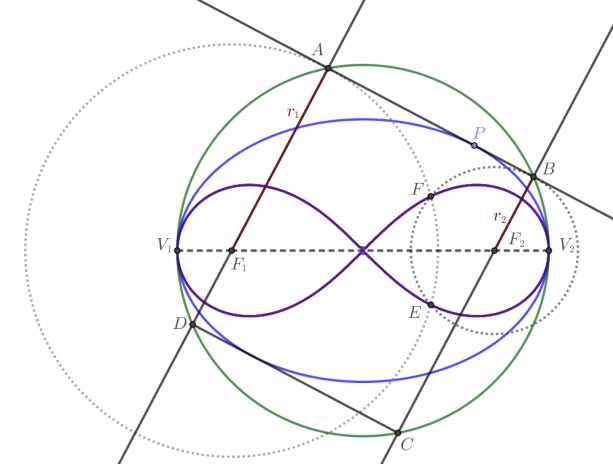 The form taken by the Cassini curve depends on the eccentricity of the ellipse. When

and the Cassini curve all become a coincident circle. When

, the curve crosses over to become the lemniscate of Bernoulli (Figure 9). When

it becomes two separate oval loops and is the classic Cassinian oval. When

the curve is bilobed with central dimples but a single loop. When

, the curve takes the form of a single biaxially symmetric convex oval. For values close to the minimum of the range of

the Cassini curve approximates a single circle while close to the maximum it approximates two small circles. In conclusion, the eccentricity of the ellipse

is entirely sufficient describe the range of shapes adopted by the Cassini curve. Indeed, we can conceive, the three curves, namely the ellipse circumcircle

, the ellipse and the corresponding Cassini curve as three degrees of response to the eccentricity parameter. The circle

degree in that it does not change at all with

. The ellipse represents the first degree response in that in flattens uniformly along the minor axis with increasing