Discovering bronze in the characteristic ellipse of right triangles

and letting their base 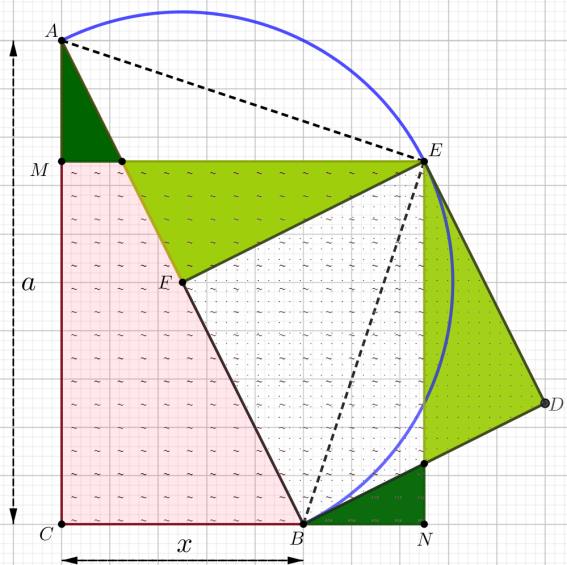 Consider Figure 1:
For a given right triangle (

). Then we have the following:

square diagonally opposite to the base vertex to the base and the altitude of the given right triangle, together with its right-angle vertex defines a square

● The area of this square is the sum of the areas of the given right triangle and the half-hypotenuse square.

of the given right triangle.

is termed the arithmetic mean square of a give right triangle.

By examining Figure 1, registering all the self-evident congruences and performing the dissections indicated by the colored and marked areas it is possible to obtain “wordless” proofs of statements 1 and 2

Thus, the side of

. Thus we term this square the arithmetic mean square.

) is the vertex of the semicircle erected on the hypotenuse of the right triangle (Figure 1). Thus, the segment

will be the diameter of the maximal circle that can be inscribed in the above semicircle (Figure 2). Now, if we draw a perpendicular to the base of the right triangle at the base vertex

(Figure 2). What will be the locus of

as the base of the triangle

grows in size? In what range of

will this intersection will happen (i.e. for what range of

units will the locus exist)? 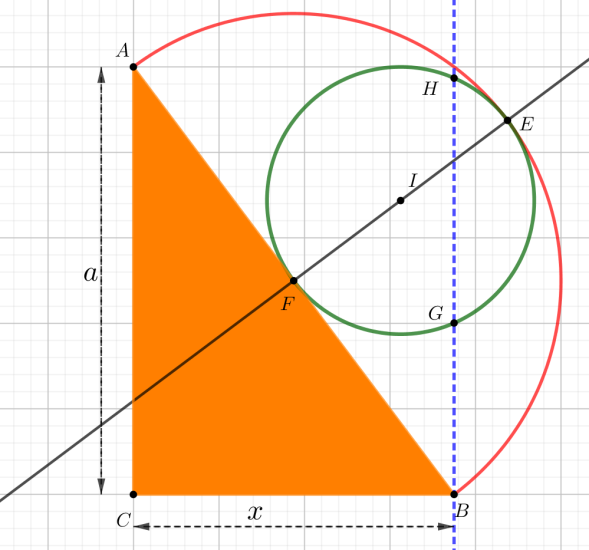 To answer the above let us place point

at origin. Then, given the above-described arithmetic mean square of a right triangle we have the coordinates of its vertex and that of the semicircle erected on the hypotenuse to be

. This is also one end of a diameter of the maximal circle inscribed in the semicircle. The second end of this diameter is the midpoint of the hypotenuse

. Therefore, the coordinates of

. Thus, we can get the midpoint of the the segment

. The coordinates of point

), which lies on the desired locus will be

using the equivalence of its two radii we can write the following:

The above equation of the locus is a quadratic equation in two variables. Hence, it is a conic. Now given a general conic

, its shape is determined by the conic discriminant:

then we have an ellipse. In the special case of

it reduces to a circle. If

we have a parabola. If

we have a hyperbola. In our case

. Thus, the desired locus is an ellipse (Figure 3).

We can now rewrite the equation of the ellipse explicitly as:

The discriminant of this equation is:

; it will be real only when:

From this we can see that the ellipse will exist only in the interval:

Thus, at those two points

become coincident. Thus, the altitude of the right triangles is a tangent to this ellipse at

(Figure 3). Further, since we have the coordinates of point

, the center of the maximal circle inscribed in the hypotenuse semicircle, we can show that as

moves along the line

. Thus, outside the above interval we see that the right triangle’s base moves beyond the maximal inscribed circle and the perpendicular to the base at

will never touch this circle.

is the same as that with

. Thus, this corresponds to the famous

triangle. It is remarkable how

triangle, which represents the most basic bhujā-koṭi-karṇa triplet, comes up as a natural feature associated with the characteristic ellipse.

and a minimum at the point

triangle (Figure 4). At both these positions the separation between the ellipse-generating points

, the ellipse-generating line passes through the center of the ellipse, point

(Figure 4). This results in the maximal separation attained between the ellipse-generating points

. This corresponds to the

triangle. In this triangle the ratio of the sum of the long and middle sides to the short side is the Bronze ratio, which we shall encounter again discuss in greater detail below.

we have the underlying

triangle (Figure 4). As is obvious, the ratio of the sum of the short and the long side of this triangle to the middle side is the Golden ratio

. Thus, not surprisingly, the separation between the ellipse-generating points at this value of

. Another notable feature of this case is that only in this configuration the lines drawn parallel to the base of the triangle at the ellipse-generating points

are tangents to the ellipse-generating circle.

(colored section of ellipse in Figure 4), we get similar triangles on either side of

. However, to the left of that region every triangle has a unique shape.

one can calculate the eccentricity of the corresponding ellipse as:

By substituting the requisite values, we get

Now, we consider the Bronze ratio

are conjugate roots of the quadratic equation

. One immediately notes the parallel to the Golden ratio

are the roots of the equation

(see appendix for more). Thus, we can write the eccentricity of the characteristic ellipse as:

With the eccentricity we can determine the axes of the ellipse; we see that:

As an aside the area of the characteristic ellipse is therefore

. We also get the aspect ratio of the ellipse to be:

Interestingly, the connection of the characteristic ellipse to the bronze ratio does not end with the parameters of the ellipse itself. Its inclination, i.e. the slope of the line joining the two foci of the ellipse (i.e. the tangent of the angle made by this focal line with the base of the right triangles) is

. Thus, the equation of the local line of the characteristic ellipse is:

, it is only time the diameter of ellipse-generating circle perpendicular to the hypotenuse of the right triangle (i.e.

) becomes parallel to the focal line of the ellipse and acquires the equation:

Thus, by doing some algebra we can see that the difference in the intercepts is

This is one of few rare occurrences of the Bronze ratio as persistent feature in geometry and to our knowledge is described here for the first time.

goes thus: If we construct a rectangle such that upon removing a square whose side is equal to the smaller side of the said rectangle we are left with a remainder rectangle whose aspect ratio is the same as the original rectangle then the aspect ratio of these rectangles is

(Figure 6). Likewise, if we get a similarly-shaped remainder rectangle upon removing two equal squares whose sides are equal to the shorter side of the starting rectangle then their aspect ratio is the Silver ratio

(Figure 6). These two ratios are also associated with diagonals of a pentagon and an octagon respectively. If upon removing 3 squares we have similarly proportioned remainder rectangle as the original one then their aspect ratio is the Bronze ratio

. This is not associated with any polygon.

All these “metallic” ratios, their reciprocals, and negative conjugates have a common feature in that they can be described by the general double hyperbolic equation with asymptotes as

-axis and the lines 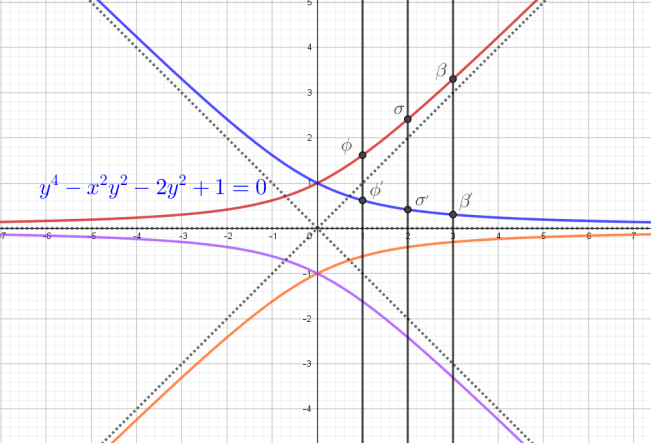 They emerge as the solutions

of the biquadratic equation in

for the integer values of

. This also shows that they all follow the conjugate principle with respect to their conjugates, i.e.

. As the double hyperbola converges to its asymptotes the fractional parts of the ratios converge to 0. Thus, it only the first few metallic ratios are likely to be “interesting”. Indeed the Golden ratio is a common encountered in all manner of mathematical situations. The Silver ratio is seen to a lesser extant and the Bronze ratio is even rarer in it occurrence (conversely to the metals after which they are named). Beyond the Bronze ratio these ratios are mostly “uninteresting” in that they are rarely found in mathematical entities.

a string initiated with 1 grows thus:

One observes that ratio of 1s:0s in these strings converges to

. Likewise, the ratio of the length of the string

to that of string

converge to the Silver ratio

The corresponding convergents for this case is the Bronze ratio

As we have noted before these all these strings are aperiodic but have an intricate fractal structure. The growth of the length of these strings can be expressed by the two-seeded sequence

whose starting elements are

as its convergent. When

as its convergent. When

as its convergent. This last sequence and related sequences with

as their convergent has an intimate connection to the function

, which is at the root of some remarkable behavior which we shall explore in the next article.