Two squares that sum to a cube

Posted on February 19, 2020 by mAnasa-taraMgiNI

Introduction
This note records an exploration that began in our youth with the simple arithmetic question: Sum of the squares of which pair integers yields a perfect cube? Some obvious cases immediately come to mind:

. In both these cases we can see that the addition of a square the to the square of the first number yields its cube. Hence, we can ask another related question: Which are the integers whose squares when added to another perfect square yield their cubes? In general terms the answers to these questions are the non-trivial (i.e. where

) solutions of the indeterminate equation:

. Due to the 8-fold symmetry we restrict ourselves to positive solutions such that

is explicitly defined by

we can study the solutions of

plane (Figure 2). At first sight, a mathematically naive person might perceive only a limited order in this plot of the solutions. However, as we shall see below, a closer examination and some algebra reveals a deep structure. 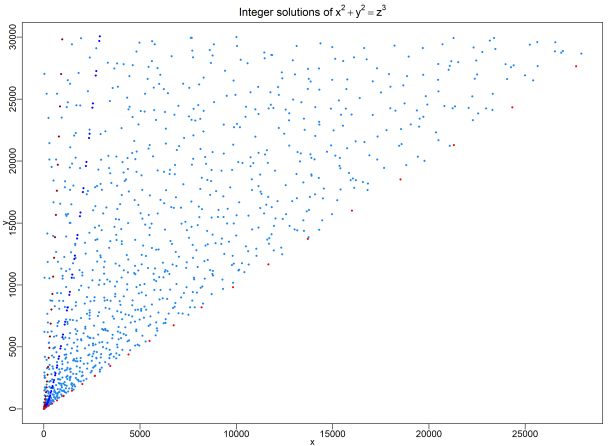 Figure 2. Some of the more obvious structure is indicated in different colors and is discussed below in detail.

Solution circles, 2 square numbers and Brahmagupta’s identity
Some simple algebra can provide an understanding of the structure of the solutions of

it is obvious that all solutions would be lattice points

on circles of radius

. Based on this, we can determine a set of

that are to solutions of

be an integer that is the sum of two perfect squares,

gives us an expression for

as the sum of 2 squares. Hence, the valid solutions to

can be derived as above. One also notices from the above expressions that

is a common factor for

in all such solutions to

While this method yields

, we notice that the same

also yields a second pair of

. Now how do we account for these additional pairs and for what values of

The most obvious set of these correspond to

being equal to special numbers such as 5, 13, 17, 29… One notices that these are both 2 square numbers and primes of the form

. Fermat first noticed that such primes are always 2 square numbers. This attracted the attention of some of the greatest mathematicians like Euler, Lagrange and Gauss, who proved it to be so by using different methods. What is important for us is that such primes are also the karṇā-s (hypotenuses) of primitive bhujā-koṭi-karṇā triples. Thus, we have

from the fact that they are 2 square numbers and

from the fact that they are bh-k-k hypotenuses. Hence, we can write,

as the sum of a pair of perfect squares when

For example, if we take

. From first set of expressions we get

. From the second we get

is equivalent to what we can get via

is a 2 square prime its cube can be expressed as the sum of distinct two pairs of squares.

Now, one can get a further set of

corresponding to solutions with two pairs of

. From above we can write,

Thus, from Brahmagupta’s identity we have:

. Similarly, one can derive formulae for

pairs whose squares can compose

. We can derive the below formulae for them:

As an example, by applying the above formulae we can see that for

, can be split up into 3 distinct pairs of squares:

The nested combinatorial application of Brahmagupta’s formula can thus result in increasingly complex formations with multiple alternative partitions of a perfect cube into perfect squares for different multiples of the 2 square primes. Thus if

we get 4 distinct pairs of

we get 5 distinct pairs of

When a number is product of two distinct

primes then its cube can be partitioned into 8 distinct pairs perfect squares. For instance,

The same applies to the multiples of these numbers by 2, 4… When a number is a product of a

prime and the square of a distinct

prime then the cube of that number can be partitioned into 14 different pairs of perfect squares. Thus,

is the first number whose cube can be thus partitioned. The next is

. Figure 3 shows some circles with multiple pairs of

whose squares sum to the same 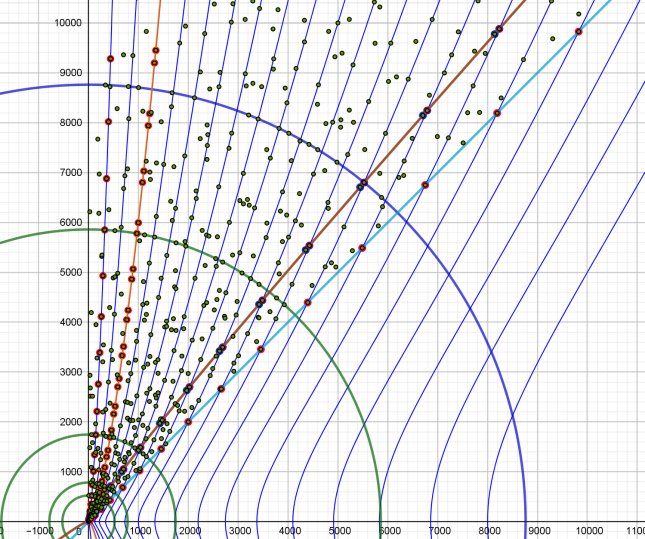 Ramanujan and Landau had independently discovered that the number of positive integers,

, that can be written as a sum of 2 squares including 0 defines a constant:

Based on this, we can also look at how many unique

We empirically observe that this

has a closed form which has deep connections to the Riemann

. However, we are not aware of a closed form for the constant

in our case or even its exact value as 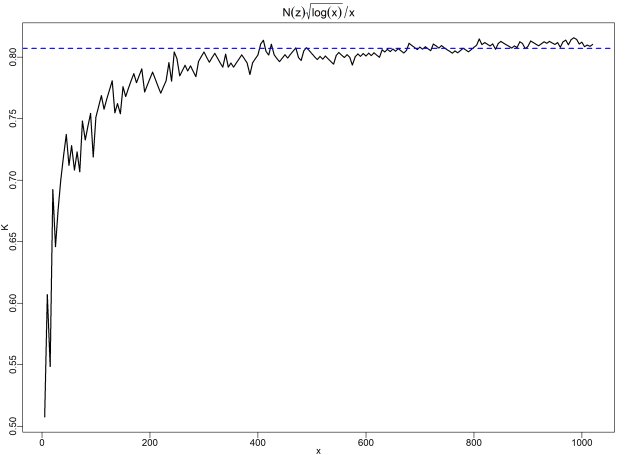 , there are also other patterns that become apparent from a closer look at the solutions in the

plane (Figure 2). The most obvious is the set of points lying on the

line at the right diagonal boundary of the plot. These are defined by a family of the form:

Then we see pairs of regularly positioned points that eventually lie closer to the right diagonal boundary (emphasized in red and blue in Figure 3). These are families that lie on one of two parallel curves. The first is defined by the parametric equations:

This curve has a lobe (Figure 5; gray) and generally resembles the shape of the curve of von Tschirnhaus (see below). The second curve takes the form:

This curve has no lobe and lies inside the divergent arms of the first one (Figure 5; dark orange).

A further family lies on the curve defined by the below parametric equations (emphasized in red in Figure 3):

This curve has a single lobe and two divergent arms (Figure 5, light orange) and is a version of the eponymous curve discovered by Ehrenfried Walther von Tschirnhaus, the famous German polymath, who among other things reinvented porcelain in the Occident. It crosses over the above two curves and proceeds closer to the vertical left boundary of the

Finally, we a family of families lying on the family of curves (shown in blue in Figures 3, 5) defined by the parametric equations:

line. Thus, each starts with the points

(Figure 3). The first of this gives yields the answer to the second question posed in the introduction. When the square of

is added to the square of

we get the cube of

. It remains unknown to us if there are any further families beyond these.