A note on the cow, the horse and the chariot in the Ṛgveda

Posted on August 6, 2017 by mAnasa-taraMgiNI

For whom you will make a pleasant world, O Jātavedas!
as he does correct rituals for you, O Agni!
He endowed with horses, offspring, heroes,
cattle and wealth attains well-being.

It would be an understatement to say in the Ṛgveda the cow, the horse and the chariot mattered a lot to the Ārya-s. Indeed, philogical evidence establishes beyond doubt that they were central to the life of the Indo-Iranians. Their mentions number in the several hundreds whereas houses and gold (hiraṇya) is mentioned far fewer times (171 times). If you sample random blocks of variable size measured in terms of half ṛk-s (50 : 5000) from the Ṛgveda and count the number of occurrences of the common words for cow(go), horse (aśva) and chariot (ratha) per block you find that the number of occurrences of any pair of them are strongly correlated (Pearson’s correlation >.9 for each pair). This suggests that they form a complex that is present throughout the RV. Yet this poses a poorly acknowledged but major paradox for the archaeology, dating and the geography of the text:
1) The RV is considered by white indologists and their fellow travelers to have been composed in Gandhāra and Pāñcanada at its oldest ~3500-3200 years before present. The chariots are said to appear in the archaeological record earliest ~4100 YBP in the Sintashta culture on the Bronze age steppes. Thus the two are said to be comfortably consistent, with the RV being composed after the ārya-s had settled in northern India in the late/post-Harappan landscape. The Andronovo culture, which succeeds the Sinthasta, is seen as the intermediary which expanded and transmitted the steppe Indo-Iranian culture to India. This is seen as being consistent with the absence of horses and chariots in the Harappan culture (though in reality horses are recorded in some Harappan sites though rare in both remains and depictions).

2) In contrast the RV shows clear knowledge of specific geothermal phenomena in the Caspian region. Further, its astronomical references compared with those of the Yajurveda and the Vedāñga Jyotiṣa point to dates certainly certainly earlier to ~3500-3200 YBP and even before the earliest Sintashta chariots, perhaps closer to 5000 YBP than 4000 YBP. These dates, while well-known to Hindu scholars since Tilak, are routinely ignored by white indologists as fantasies of the Hindus despite early acknowledgment of the same in their midst by Jacobi. Further, the study of the ethnogenesis of the Indians suggests that the main Indo-Aryan contribution came from the invasion of some population related to the Yamnaya of the early steppe Bronze age. This population developed and expanded subsequently as the Sinthasta or its successor Andronovo culture which show evidence for the expansion of the “Indian” branch of the R1a1 Y-haplogroup, which is associated with the invasion of India by the ārya-s. Further, there is the confusing evidence of Sarasvati river also pointing to an earlier date for the RV, albeit with much lesser certainty for it would dictate an Indian locus.

We do find the early dates for the RV based on astronomical allusions to be convincing. Further, as discussed earlier it does match with other features like: 1) near lack of rice agriculture and dominance of barley; 2) the rarity of the sword and the gadā (which can be associated with BMAC) as war weapons; 3) hardly any mention of the complex society with multiple service castes found in the Yajurveda brāhmaṇa-s and ritual. Thus, to us the RV in most part bears all the signs of an early text that is actually not consistent with what we know from archaeology of the period around 3500-3200 YBP in northern India. Hence, we accept the presence of a real paradox that needs wider recognition and study to be resolved suitably.

Irrespective, of how exactly the scenario resolves we can paint some aspect of the lives of the ārya-s based on the RV: They were different from the later horse-centric pastoralists like the steppe Iranians (e.g. śaka-s) and Altaic peoples for whom the horse was primary and the cow marginal. In contrast, for the ārya-s the cow was central to their nutrition and economy and the horse played a central military role. While the ārya-s certainly rode horses, its military role in that period was apparently not so much as direct mount as much as for drawing the war-chariot. Accordingly, the chariot was an important symbol of power. This, expressed itself in the form of the chariot/horse races which were an important form of contest, entertainment and ritual. Further, unlike the later horse-centric steppe pastoralists the ārya-s did practice some agriculture even before they arrived in the Indian subcontinent and seemed to have focused on barley cultivation. Here, again cattle were clearly central; they drew the plow, concomitant with which seeding of the furrows took place. Thus, the economy of the ārya-s was necessarily a mixed one combining both cattle-rearing and agriculture. Other than horse with its special military role, goats and sheep were also reared with the latter supplying wool which is mentioned in the RV. However, notably there is no mention whatsoever of cotton. Camels are mentioned 5 times (4 times in maṇḍala 8) – thus, they were known but do not appear to have been very important, unlike in the case of the Avestan Iranians. This suggests that though the two cultures were related there was a geographic/temporal separation between the Avestan Iranians and RV ārya-s, with the former being obviously younger due the daiva-ahura polarization. 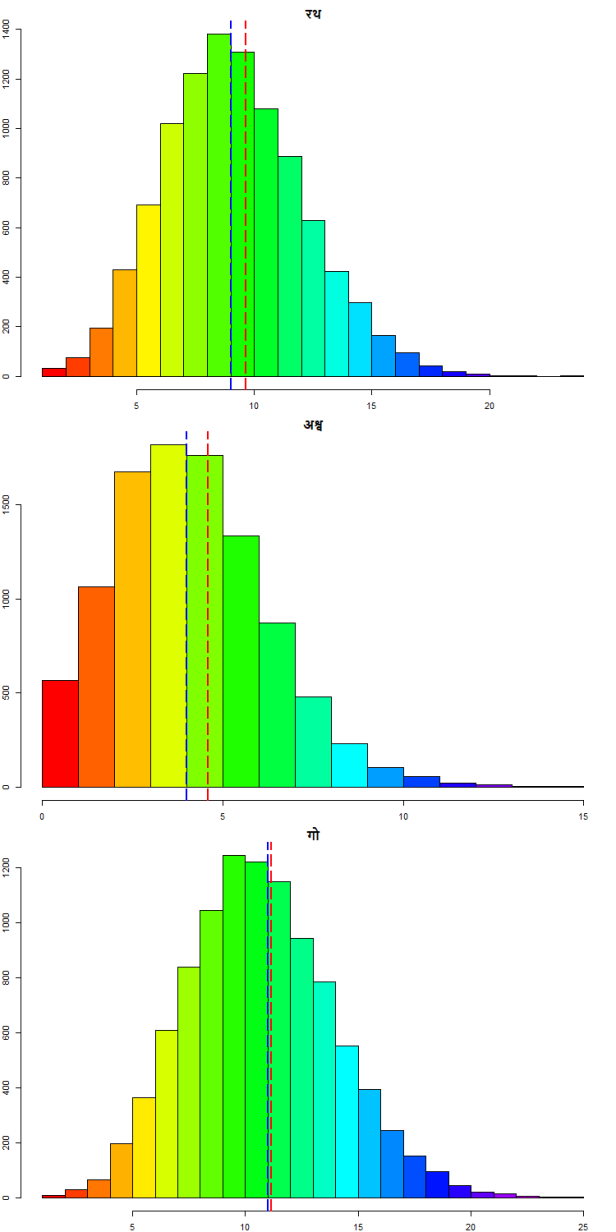 That said let us take a closer look at cows, horses and chariots in the RV. In the first experiment we draw 10,000 blocks of 350 half-ṛk-s each at random from the RV and count the number of times the words aśva (excluding the name of the gods Aśvin-s), ratha and go. A histogram of their occurrences (Figure 1) shows that while the cow is quite normally distributed there is some skew for the chariot and even greater skew for the horse (In a typical run we get skewness(ratha)=0.325; skewness(aśva)=0.472; skewness(go)=0.277). This suggests certain regions with higher than typical mention of these.

To understand the origin of this skewness better we next look at the occurrence of these words per maṇḍala normalized by the number of half-ṛk-s per maṇḍala (Figure 2).

We notice that the maṇḍala-4 of Vāmadeva Gautama has an above average density of references to the word go. We wonder if this is actually a purposeful encoding of their clan name Gotama (literally meaning he with the best cattle) by the main author of the maṇḍala. Of course the self-reference Gotama occurs here but also the phrase gomad (with cattle) is frequently used. This could be a parokṣa signature of the Gotama-s. Then we observe that in maṇḍala-9, the Soma maṇḍala there is the highest per maṇḍala density of this word for cow. This is because of the frequent metonymic usage of cow for milk which is mixed with the soma (Ephedra species) juice in the preparation of the ritual beverage (also probably the placing of the soma stalks on cattle hide). Notably, aśva and ratha are both clearly over-represented together in maṇḍala-5 of the Atri-s.

To understand this better we take a closer look at the mention of these words across the RV by calculating counts in continuously sliding windows of 100 half-ṛk-s from the beginning to the end of the text Figure 3).

Figure 3. (mean across all window is green line)

We notice that whereas go shows a fairly continuous distribution of fluctuations, ratha less so, and aśva shows few clear standout peaks. The largest of these is seen in maṇḍala-1 which corresponds to the famous aśvastuti of Dirghatamas Aucathya which is deployed in the grand Aśvamedha ritual. Notably, there are two standout peaks for aśva in maṇḍala-5 of the Atri-s and maṇḍala-7 of Vasiṣṭha-s which are correlated with corresponding peaks of ratha. In the case of the Atri-s a part of this again relates to a dhānastuti where an aśvamedha-performing Bhārata monarch is praised. But even beyond this the Atri-s and Vasiṣṭha-s to a lesser degree seem to have a special tendency to mention horses and chariots more than on an average in certain contexts. This does not seem to have geographic factor because the Atri-s show links to Kāṇva-s of maṇḍala-8 who show no such special proclivity. Rather, it does raise the possibility that the Atri-s were either special connoisseurs or breeders of horses.

Endowed with cows, with horses, with chariots, with good heroes
with gold, wealth you have given us, O Maruts!
Make praise be ours O sons of Rudra!
May I partake a share of your divine aid.

See also:
The maNDala graph for R^iShi-sharing
Some trivia concering the Adi-shruti
The Rāmāyaṇa and a para-Rāmāyaṇa in numbers-II: Evolving early Indo-Aryan warfare